Twelve years ago a volcano exploded, plunging the City of Neverwinter into fiery chaos.  Two years ago, the person now known as the Lord Protector began a costly endeavor to rebuild the City.

Session 1: Beauty is in the Eye of the Beholder

Our adventure began at the Bawdy Boar, a tavern in the safest part of the City known as the protector’s enclave.

Armed with nothing but a stick I used for prodding my pigs (get your mind out of the gutter, my wooden stick, not the one in my trousers) and thirst for adventure, I quickly found a group of companions with a similar desire for glory-

“EYE see what you did there”

We began by talking with a few other patrons at the bar.  Notably, Baron Hightower purchased a potion of healing on credit after some negotiation.  And more notably, Peter struck up a romantic friendship with Manly Littleknight (see picture), a young woman who wishes to adventure, but finds that her companions often rob her.  At Peter’s request, young Miss Littleknight joined our party. 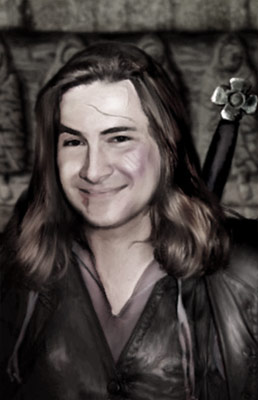 Eventually, we took a look at the Bawdy Boar’s Shield Wall, a place where missions for would-be adventurers are posted.

Although I wished to accept a mission that provided weapons, we chose the mission that paid the most (500 gold).  Our mission was to secure a locked chest from Vellgard Manor, and return it unopened to Quarra Vellgard.   We were given a runestone to guide us in the venture.  Quarra Vellgard and her lovely daughter (I was nice enough to pretend they were sisters) were leaving for Tethyr at dawn by ship.

Sword Captain Olara tried to talk us out of leaving the protector’s enclave, she seemed skeptical that we could protect ourselves since about half of our party was armed with makeshift weapons and farm implements.

On our way we killed a gang of Blood Thorn (or throne?) Brothers that attempted to rob us.  My wish for a better weapon was granted by the grace of Silverbeard, as I obtained a battleaxe from one of their corpses.

We proceeded East from Blackwell Court to Vellgard Manor, and although we knew of a secret entrance through the sewers, we decided to go through the front gate.  We traveled up a twisting uphill path to the front gate and encountered numerous traps, including spikes in the ground, and a collapsing arch.  Peter rescued the lovely Miss Littleknight from certain doom as the arch crumbled around her.

In order to avoid further traps, Baron Hightower led our party in scaling a wall to bypass the path and go straight to the front door.

Inside the Manor, there was what appeared to be goblin feces scattered everywhere. Everyone complained about the smell, but it was a lot better than the smell of my family’s pig farm on a hot day.  We encountered a trapped urinal.  What vile creatures would trap their own urinal?  We soon found out–

After exploring a bit we encountered a dining room that included a pile of discarded junk from which we heard many snoring creatures.  We carelessly awoke them and soon found ourselves in pitched battle.  They appeared to be goblins with four arms.  We attempted a classic pincer maneuver- overturning a table to provide a strong center, with a few of us approaching from either side of the goblins.  The halfling threw oil on the junk pile the goblins were hiding in and lit it.  Everything seemed to be going well until the goblins burst forth from hidden tunnels all around us.

In an effort to help Manly in her quest to be a great adventurer, Peter pushed her forward into battle.  Unfortunately, she was struck and rendered unconscious.  We eventually prevailed but Hildegarde was gravely injured and only revived after Baron Hightower used his potion to heal her.

We heard the noise of more mutant goblins, and I argued against keeping the unconscious Manly with us.  But Peter insisted that she remain in his gentle care, and carried her. 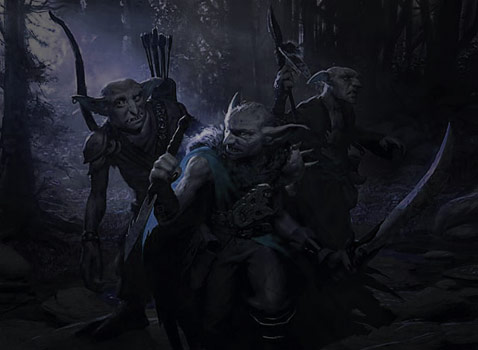 We descended into the cellar, and found our way to a treasure chamber with the assistance of the runestone.  Inside the chamber, we ran into what appeared to be a beholder, which after some negotiation ate the runestone and left.  We heard it attacking the goblins on its way out.  Although there was a a fair amount of copper and silver in the chamber, we decided not to thoroughly loot the chamber but instead leave quickly after the beholder to take advantage of the confusion it caused. We took the chest we were tasked with returning and a few gold pieces and left the way we came.

We were ambushed on the way out by a group of rogues, we killed one and the other two fled.

On our return to the protector’s enclave, we again drew the notice of Sword Captain Alara, and she seemed at least marginally impressed.  She offered us work with the guard.

The Vellgard sisters immediately burned the contents of the chest and then canceled their plans to leave the City.  We were paid as promised.

We found that we had unknowingly assisted the Sons of Alagondar.

Treasure procured-
88 gold pieces each from the quest reward and sale of the few items of loot we could sell.

Items not divided in treasure- several small items found in the manor, including sacks, a carpentry kit and cooking implements.  Several unsellable weapons.  A healing potion given to Baron Hightower to replace the potion he used to help Hildegarde.

Perhaps the greatest treasure was the one shared by [] and Manly Littleknight in their blossoming romance.