Why You Should Be Running a “Cloud” Game… (Part 3)

So, let’s get back to our discussion of running “cloud” campaigns.  Confused because you missed the earlier installments?  You should probably click here.

Hits and Misses:  Some “Cloud” Campaigns I Have Run

Before I start dispensing arguably questionable advice, let me give you a quick idea where I’m coming from.  My bona fides, if you will.  Over the past few years, I’ve run three separate “cloud” campaigns, for groups of ranging from a modest 13 players all the way to sprawling campaigns of 25 or more players.  Each time, I discovered some things that worked, some things that didn’t, and a few things that just plain exploded in my face.  Here are my “takeaways” from each.

My first “cloud” campaign was… 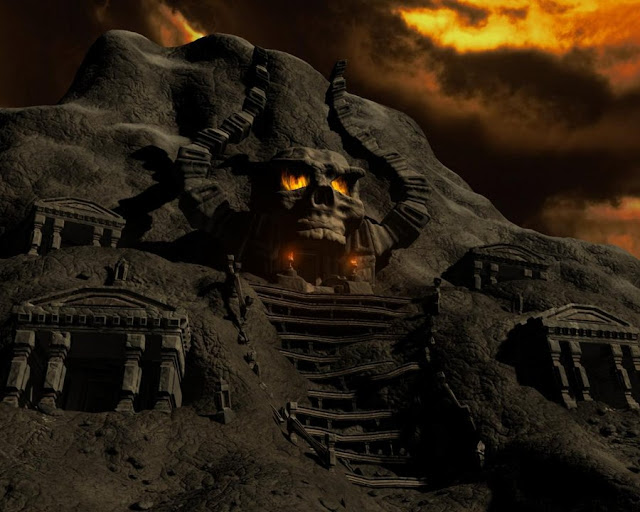 “Skull Mountain,” was inspired by this awesome art from Callithlin.

Boy, this game was a beast.

Goodman Games’ delightful Dungeon Crawl Classics had recently come out.  And a lot of my favorite blogs, like Dungeon Fantastic, Dreams in the Lich House, The Mule Abides, and the Alexandrian were spilling lots of (electronic) ink on the subject of of the “mega-dungeon,” a campaign set completely in a single, sprawling, multi-level monstrosity of a dungeon, which serves as the “tent-pole” or focus of the entire campaign.  So, I set out to design and run a “cloud” game in a mega-dungeon – following in the footsteps of the late, great Gary Gygax and his original Castle Greyhawk. 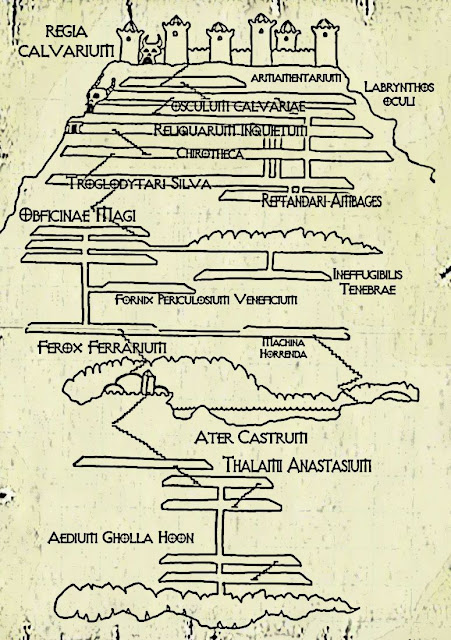 One of the handouts from the campaign:  A carving found early in the dungeon showing a cross-section of all the different levels.  Bonus points if you took Latin, and can read it!

The set-up was relatively simple.  A corrupt city modeled on Fritz Leiber’s Lankhmar, built in the shadow of a terrifying, skull-faced mountain mega-dungeon that was once home to an evil sorcerer.  Each game night, the first eight players to sign up (via email) would team up, explore as much dungeon as they dared, and flee back to town before the game concluded.

The dungeon was vast, with many different levels that were easy to access from the surface, lots of additional secret entrances and short-cuts that could quickly dump you into the deeper levels, and a few “sub-levels” and “mini-dungeons” (like the ruined castle sitting atop the Black Mountain) that presented their own special challenges. 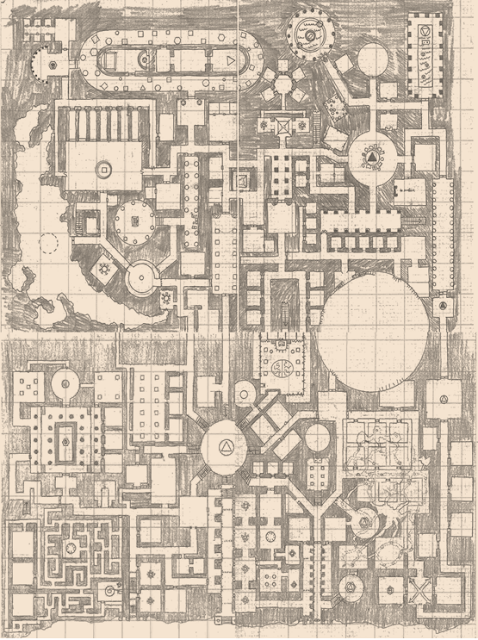 Skull Mountain:  Level One Map (made from 4 pages of large graph paper taped together, scanned back before I went in and keyed all the rooms).

I ran Skull Mountain for about a year (real time) and about 15 or 16 games.  Now, let’s talk about what worked, what didn’t work, and what really, really didn’t work.

Room for Just-About Everything – Skull Mountain, like all my “cloud” games, was essentially a pick-up game, not my main campaign.  So, while it was a very focused game (all about dungeon crawls in a single mega-dungeon), it also needed to be broad enough to hold my interest, with room to cram in interesting ideas from all the blogs and adventures I was reading.  The concept of a mega-dungeon built by a mad wizard works perfectly.  Find an interesting idea for a wandering encounter on The Dungeon Dozen?  Easy – just drop it right in.  For example, on just the first level of Skull Mountain, the players found:

…and lots and lots of other stuff.  No idea is “too weird” or “out of place” in a dangerous, plane-hopping wizard’s dungeon.  So, after just a few games, gleeful players were running around with (barely controlled) pet golems, sci-fi disintegrator guns, mutations (like a second, talking face growing out of one PC’s back), and all sorts of craziness.  Anything I cooked up, or read online, or dug up from some old adventure, could go right into the dungeon.

The “Escape the Dungeon” Rule – In any “cloud” game, one of the more difficult challenges is making sure that, before each session is over, the game reaches a suitable stopping point.  If Mike, Michaelle, and John are in the Skull Mountain game on Tuesday, but only John will make it to the next game, you obviously can’t just stop cold in the middle of the dungeon.  So, I borrowed a simple rule I have seen used in a couple other games:  If the PCs didn’t “escape the dungeon” and reach the surface by the allotted end-time, everyone had to roll on a ridiculous and deadly table I wrote up to determine their fate.  This worked surprisingly well.  All night long, the players would be nervously checking the time, and trying to gauge how far into the dungeon they could go and still make it out.  Only one group ever had to roll on the table, because they made sure they were  back in town before the session ended.

“The Wall of Shame” – I can’t take any credit for this, because it just happened spontaneously.  During the very first game, as the PC body-count started to climb, players gleefully began tacking up the character sheets of their dead PCs up on the wall, often scrawling a witty pun about how the character met his or her end.  Great fun for both the players and myself, and it nicely reinforced the mood that this was an “old school” game where the occasional (or even frequent) character death was something to be expected and, indeed, reveled in. 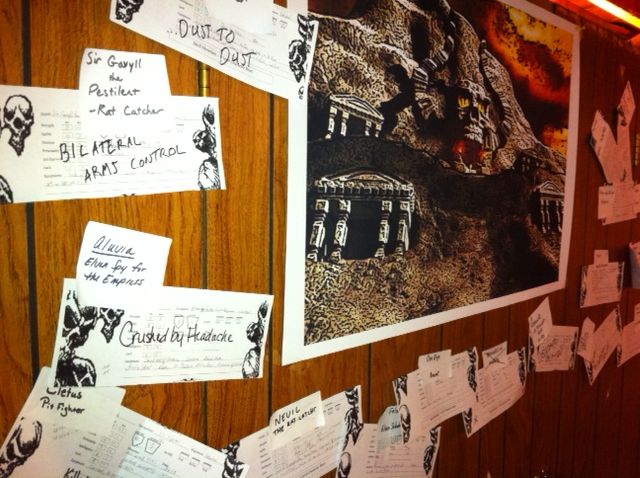 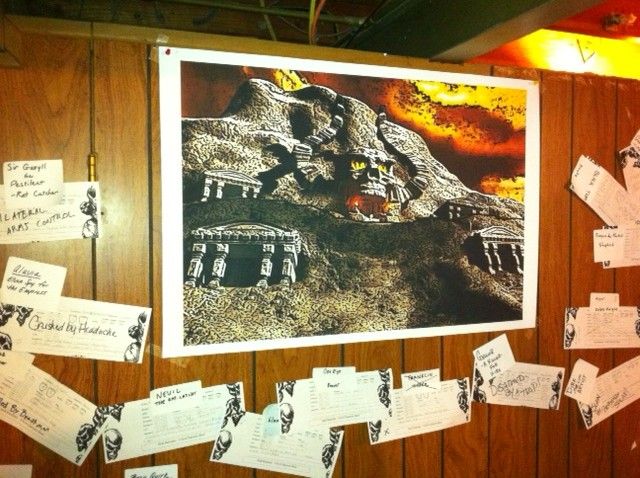 Gold as XPs, and the Carousing Tables – I have always struggled with giving PCs something to do with all that gold they haul out of dungeons.  If you found a million dollars, why keep adventuring?  You’re already wealthy enough to retire in kingly fashion?  Thus, the idea of using “carousing tables” to encourage PCs to fritter their treasure away has always struck me as an incredibly useful idea (see Rules & Roles here for an excellent overview on the history of “carousing” in D&D and the OSR).

For Skull Mountain, I devised a series of carousing tables modeled upon various activities that dark fantasy adventurers often engaged in.  If your PC wanted to spend his or her time drinking and gambling, you rolled on “Carousing: Table A.”  If you wanted to try your down-time luck cutting purses and burglarizing the local nobles, you rolled on “Thieving About Town: Table B.”  If you wanted to pursue magical research, you rolled on “The Dark Arts: Table C.”  And so on and so forth.  Every time a player showed up for a game, he or she picked one table and rolled.  Each table was loaded with various ways to lose all the gold and treasure they had found so far.  But for every 100 gp of gold lost or gambled away, they received a set number of experience points – so “losing” gold was really “winning” XPs.  With a really lucky roll, you might also increase one of your stats, or gain a henchman, or learn a new spell.  Of course, an unlucky roll could leave your character penniless, still wounded when the next adventure began, or badly needing treatment for a venereal disease.

These tables worked fabulously, and the players never even considered “retirement,” because treasure was just a stepping stone to a more powerful character.

(As an aside, I’ll be posting some of these carousing tables over the next few weeks.  Get your 1d30 handy and see how well you would fare.)

A Million Clues: Giving PCs a Reason to Talk – Here’s another bit that worked far better than I expected.  Before the first PCs ever set foot in the dungeon, I took a few hours and put together a horde of partial maps, passages from adventurer’s journals, and other little clues as to the major hazards of the dungeon, and then sprinkled these liberally around the opening areas.  But, to keep things interesting, only the player who actually “found” the map or handout could look at it during the game.  So, if Joe’s Halfling discovered a partial map of the second level, Joe was free to consult and share that map while he was playing.  But if Joe’s Halfling wasn’t present at the next game, both he and his map were out of reach.

Wondering who the god Vorn is?  You clearly need to buy this, the best city supplement ever produced for any RPG.

Soon, there was a blizzard of handouts, clues, and maps flying around.  And each time a new group of PCs got together, they were eager to compare notes, hastily copy partial maps, and share news about what the others had found (and often run from) in the dungeon.  Thus, we had some great roleplaying in a game where that easily could have fallen to the wayside.

A Very Easy System – As I mentioned earlier, we used the Dungeon Crawl Classics RPG, which is relatively rules-light (except for the magic system), and similar enough to the core of D&D 3.5 that my players easily picked it up.  Even better, you can whip up an entire batch of 0-level starting characters in just a few minutes – perfect for a game where new players might show up unexpectedly, and established characters tended to die with some regularity.

Skull Mountain was a blast, but as a “cloud” game, it suffered from two pretty big flaws…

Out-of-Control Prep Time – First, as anyone who has tried to run a mega-dungeon campaign knows, they are incredible time sinks.  Just getting the dungeon “ready for play” took weeks of work.  Even more problematic, I often found myself spending hours on particularly clever puzzles, traps, and encounters, only to stare on in horror as group after group walked into the Room of the Perilous Whatzit, decided that damned thing looked waaaaaaaay to dangerous to mess with, and decided to take the long way around.  This was great for player freedom and choice, but rough on the poor, overworked DM.

A Too-Narrow Focus – The other big problem with Skull Mountain was the limited focus on dungeon-crawls.  Sure, lots of us love a good crawl.  But certainly not everyone.  The players who tend to enjoy roleplaying and politics more quickly began pushing to expand the game into something it was never meant to be (e.g., adventuring in the city, or just plain hanging out in the tavern).

Were these “fatal” flaws?  Not really.  Skull Mountain had decent run, and every game inevitably comes to an end.  But when I wrapped it up, I knew that my next “cloud” campaign would need a little broader focus, and that I would have to find some way to reign in the out-of-control prep time.  But I’ll write more about that in Part Four, coming soon.